You are here: Home / Library / A Cardiologist Visits Jesus 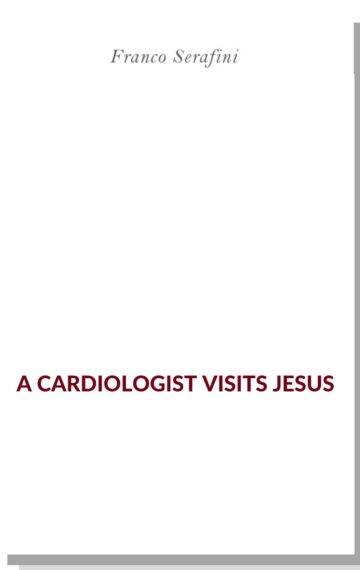 Has Jesus of Nazareth ever had a medical check-up?

In recent years, five Eucharistic miracles have been investigated with sophisticated analytical methods. The most cutting-edge technology that is used in forensic medicine and TV detective series has also been applied, just like at a crime scene, to consecrated communion hosts that have been bleeding. What were the outcomes of clinical, laboratory, histological and genetic analyses performed on these mysterious and bewildering tissues?

A medical doctor will guide us through the results, and reveal to us a common pattern arising from comparing one event to the next: a pattern repeating itself with reassuring and baffling punctuality.

For the first time in the history of Christianity, Eucharistic miracles can finally also speak the “aseptic” and “authoritative” language of science… And what do they have to say to modern people?

We shall attempt describing these human tissues that were remarkably still alive at the time of sampling: agonizing heart muscle tissue and blood that reveal a precise diagnosis. We shall see the recurrence of the same blood group, leading to an embarrassing and ever more unarguable statistical conclusion. Finally, we shall also reflect on the bizarre and elusive, but also rational behavior of the most sought-after DNA in the world.

This is a fascinating read. Dr Serafini is never overtaken by his Faith, but rather – and thanks to it – he is looking for the Truth in every laboratory result and in all of his colleagues’ reports. He strives to make sense of all the data to make it understandable. He maintains a “skeptical” scientific and Christian attitude while acknowledging to be facing a Mystery at the same time.
Aleteia

Cardiologist Franco Serafini examines all of the five eucharistic miracles that have been studied by science and draws connections between them and the scientific research on the Passion Cloths. The final result is astonishing.
La Nuova Bussola Quotidiana

Anna De Piaggi wrote on 24 January 2019 at 09:12:
First and foremost, the book’s precision and meticulousness should be acknowledged, besides its clear explanation of the medico-scientific details that are essential for widespread divulgation.
Secondly, its frank reflections are truly excellent. Although, at present, Catholics are too often crushed by a paralyzing sense of inferiority, the author is not afraid to affirm his Faith: he does not fear it as something thatcould cloud his clarity of mind or the transparency or scientific value of his work. He expresses his thoughts with fine humor when commenting on gawky ideological opinions. In addition, he has the disarming courage required to not weaken his final conclusions with “politically correct” statements such as “according to me” when the objective evidence demands to be believed as a matter of intellectual honesty and loyalty.
This attitude is hard to find these days.

from ibs.it
filippo
18/07/2019 21:14:12
Faith and science are often considered to be diametrically opposed. Moreover, the world of logical rationalism completely rejects the idea that the body of Christ could be in that little piece of bread that is the consecrated host, let alone the possibility that blood or cardiac tissue could emerge from it.
This book, written by a cardiologist, dispels these ideological standpoints and builds up a coherent and overarching scientific interpretation of Eucharistic miracles, based on the results of investigations grounded in the scientific method and its techniques.
Reading it is an exercise in humility for those who only believe in reason, and an injection of faith and hope for those who have met Christ in that Bread and his Word.
from amazon.it
Sam
5.0 out of 5 stars
A surprise coming from a scientific perspective on Eucharistic miracles.
Reviewed in Italy on 9 December 2018.
Purchase verified.This book is peculiar and against mainstream thinking. It analyzes scientific data related to Eucharistic miracles with clear and cutting words.
Mauro Maria Borghi
This book explains and analyzes what has been observed and verified in a rational way
Reviewed in Italy on 14 July 2019.
Purchase verified.
I suggest reading this book to anyone seeking personal enrichment, as it provides many
Andrea
Very interesting. Not to be missed.
Very interesting read, written by a medical doctor, rich in scientific data. It strikes a very good balance between Faith and Reason, shedding light on the subject of Eucharistic miracles. At present, I think this is the only text providing a clear and accurate scientific interpretation of what, up until recently, has been a mystery that could only be comprehensible through Faith. This is a book that is certainly open to future developments and further medical analyses.

Amazon customer
Very accurate work, gathering the best scientific research, tests and evidence on some Eucharistic miracles (more or less well-known). It is engaging and objective at the same time. Enjoyable even by those who have no background medical knowledge.

Daniele 49
4.0 out of 5 stars Very good book, despite its awful title which really spoils it.
Reviewed in Italy on 7 November 2020
Purchase verified.
This book is objective, well-written and scientifically correct. It touches on a subject at a crossroads of individual opinions that are heavily conditioned by a person’s upbringing, his or her culture, previous life and the answers to the big questions of life that anyone holds deep inside, such as whether God exists or not and whether it would be possible that He revealed himself visibly in our lives in some occasions, to bridge, even if just for a moment, the infinite distance that separates Him from us, even for those who believe.
I think that for many, even the topic of the book itself may evoke skepticism and a loss of interest. The author, instead, declares it from the first few pages that these events, involving bleeding hosts, will be dealt with in a purely scientific manner when it comes to describing their features as phenomena, as well as considering potential non-miraculous causes for them.
Every piece of information related to the five miracles is absolutely well supported by evidence, direct witnesses, photos, videos and laboratory studies that were often repeated and “blinded” to preserve their integrity, for instance by not revealing information on the origin of the samples to the researchers conducting the experiments.
It is written by a doctor, a cardiologist, who can offer his peculiar specialist knowledge. By the way, this explains the horrible title probably chosen by someone else. The reader is taken by surprise, even more surprised by the consistency of the various but also infrequent events that took place in different places at different times. As an example, it is impossible not to be touched by the histologic images of the sacred Hosts identified as heart tissue of AB blood group, the same one of the Shroud of Turin. This group is very rare among human beings (about 5%). Such coincidence has an extremely low likelihood of being due to chance alone. The reader can hardly dismiss such compelling evidence and will probably feel baffled an unable to lightly disregard the argument.
In essence, it is a captivating read which cannot leave the reader unperturbed
Lenzi Graziano
5.0 out of 5 stars, exceptional.
Reviewed in Italy on 11 May 2019
Purchase verified.
This book is very special. Its subject is always very relevant, although sometimes undervalued or mistreated. However, the author does justice to the subject through the medico-scientific approach. Nothing is put down to randomness or unclear explanations.
We use cookies on our website to give you the most relevant experience by remembering your preferences and repeat visits. By clicking “Accept”, you consent to the use of ALL the cookies.
Do not sell my personal information.
Cookie settingsACCEPT
Manage consent

This website uses cookies to improve your experience while you navigate through the website. Out of these, the cookies that are categorized as necessary are stored on your browser as they are essential for the working of basic functionalities of the website. We also use third-party cookies that help us analyze and understand how you use this website. These cookies will be stored in your browser only with your consent. You also have the option to opt-out of these cookies. But opting out of some of these cookies may affect your browsing experience.
Necessary Always Enabled

Performance cookies are used to understand and analyze the key performance indexes of the website which helps in delivering a better user experience for the visitors.

Analytical cookies are used to understand how visitors interact with the website. These cookies help provide information on metrics the number of visitors, bounce rate, traffic source, etc.

Advertisement cookies are used to provide visitors with relevant ads and marketing campaigns. These cookies track visitors across websites and collect information to provide customized ads.

Other uncategorized cookies are those that are being analyzed and have not been classified into a category as yet.